The doctor, an assistant specialist urologist, had performed a vasectomy on a patient who was meant to be undergoing removal of scar tissue.  NHS England categorises such a surgical error as a ‘Never Event’: a serious incident which is wholly preventable.

When he realised his mistake the doctor performed a difficult reversal procedure 3 hours later.  He was wrong to do so as he had not performed a reversal for more than 5 years and had not obtained the agreement of a senior consultant colleague.

Despite admitting his mistake and undertaking remedial courses, the General Medical Council submitted that his two errors were so serious that his fitness to practise remained impaired and that the public interest required a sanction restricting his registration.

David Morris persuaded the Tribunal that this episode, in an otherwise unblemished career, did not require a finding of impairment.  The doctor was instead given a warning.

David was instructed by Alison Troake from the Medical Defence Union Legal Department. 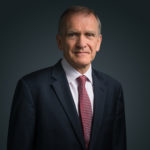 David Morris
Back to index